The second most frequent cause of death on the job is falling. Now, no one wants to fall; and most people consider themselves to be reasonably careful. So why does this kind of an accident still make up such a large portion of the pie?

Well, one factor is definitely ladder use. Forty-three percent of fatal falls in the last ten years have involved ladders, and every year there are more than 164,000 emergency room-treated injuries caused by falls from ladders. The estimated annual cost of ladder injuries in the U.S. is in the double-digit billions. So, addressing the top three most common mistakes made on ladders is a good place to start.

Say you bring out a ladder, all the way to the job site, and you find it’s not quite long enough. You’re annoyed. You think you’re just going to lose time by going back to get the other one. You reason, “If I just climb up on the top and reach just a little, surely I can do it…”

This is a deadly thought process. And what makes it even more deadly is that you may have done the same thing seven times—or seventy times—and never gotten hurt before. This builds a faulty kind of “it will never happen to me” confidence that’s actually only based on the luck of the draw.

But this is such a common occurrence that falls from over-reaching, especially from extension ladders, are the leading cause of ladder-related deaths.
The other unfortunate component is a sense of pride in one’s willingness to do something risky and dangerous in order to get the job done; a sort of “I’ll take one for the team” mentality. But the guy who thinks, “Sure it’s risky, but I’m tough,” isn’t the ideal worker imagines himself to be. He’s actually foolishly endangering his life, the financial stability of his company, and the jobs of his co-workers. And what for? For the price of the time it would take to get the right ladder. This roughly equates to a reckless driver who cuts back and forth through traffic only to reach the next stop light 10 seconds ahead of the rest of the cars.

Go back and get a ladder that’s the right size. You may even like to choose a ladder that has outriggers which increase its stability and make it harder to tip. A ladder like the one you see in this picture (right) has outriggers that adjust independently for stability on uneven ground. It even contains built in bubble levels for use during setup so guesswork is eliminated.

POUNDING NAILS WITH WHATEVER’S HANDY
aka “Wrong Type of Ladder”

Would you ever use a wrench to hammer a nail? Well… honestly, you might. It would probably depend on how urgent it was to get that nail in and how far you’d have to go to get a proper hammer.  But what about this next scenario… Would you ever consider using your teeth to pull out a nail? Now, that’s a whole other situation! Who would recklessly risk the pain of breaking a tooth and the thousands of dollars of dental work, just to pull a stupid nail??? What’s the difference between these two examples? It comes down to one thing: the risk of personal injury.
You need the right tool for the job, and that includes the right ladder. Since falling is the second most frequent cause of death on the job, choosing the right ladder for the situation is often actually a matter of life and death.

Use the right piece of equipment for the job.  There are many varieties of ladders available for just about every conceivable type of work.

For example, going up high and staying close to what you’re working on is a problem with a standard step-ladder. The higher you go, the farther you are from the wall. To get around this, people often turn ladders sideways and then twist as they work, greatly increasing their risk of tipping the ladder.

However, this is all unnecessary if you have the right equipment. Get a step-ladder that is made to allow work at a 90 ̊ angel, like the one pictured here (left). One side is adjusted to a shorter length so that it’s almost completely parallel to the wall, and the other side is adjusted longer so that the worker is then able to face the work surface with his feet on a solid rung and apply pressure from a much more stable position.

Another example, when you need both hands for the job, is a ladder with a built in work platform so that you always have the 3 points of contact. The one you see pictured here (right), has the work platform, outriggers for stability, wheels for easily moving it around, and even a safety net to keep a dropped tool from landing on someone below.

And if the job actually calls for scaffolding, please don’t do what this guy tried. Cobbling together his own homemade scaffolding earned him the 2015 “Biggest Idiot on a Ladder” award when someone nearby happened to snap this picture (left).

Finally, you may like to download the NIOSH app for ladder safety for your phone. It will help you on the job to make sure your ladder isn’t positioned at an unsafe angle.

NO ONE GETS HURT FROM THIS HEIGHT
aka “I’m Superman”

“What’s the worst thing that can happen from falling off a little ladder? Didn’t you jump off things higher than this when you were a kid?”

Education is the only solution to having these kinds of thoughts when climbing up a ladder. Commit this fact to memory, and share it with your co-workers: more than half of the deaths from work related falls happen from a height of 20 feet or less.

The probable reason so many deaths occur even from these “lower” heights is that people underestimate the danger. They think no one really gets hurt falling from this “low.” But the truth is that you should employ the same level of caution and care whether you’re cleaning windows on a skyscraper, or climbing up to change a lightbulb. OSHA requires fall protection for any person who has to work their job from four feet or higher. And there’s a simple reason for that: people can get badly injured, and yes, even die, from a “little” fall of just four feet. Think about it. If a kid can get a cracked skull or a broken arm from falling off a skateboard, it should be easy to see how a fall off any ladder is bad news.

Even though this article is about the top three ladder mistakes, ladder safety really just involves two main things. First, you have to use the right ladder for the job: it needs to be the right height, and the right kind. And if your boss doesn’t own the right ladder, tell them what they need.  Believe me, no business owner in their right mind wants to deal with workman’s compensation injuries, missed work, job shutdown, and possible OSHA fines! The investment of a couple hundred dollars, or even a thousand, in a good quality ladder, will save hundreds of thousands of dollars in the end.

Second, never again act like climbing a ladder or working from a ladder is no big deal. Make up your mind that you’ll never again take a stupid risk for the sake of time. And never praise a co-worker for taking an idiot risk… What did they save? A few minutes of time. What did they risk? Their safety and possibly everyone’s jobs. Instead create a culture of safety. You’ll help reduce the number of injuries from falls if you take your safety into your own hands.

By Peter Kavia
CAI Safety Systems
Peter has been a safety expert for almost 20 years and is certified as a Qualified Fall Protection expert. He currently holds the title of Director of Operations for CAI Safety Systems, a custom turnkey fall protection company in Southern California. 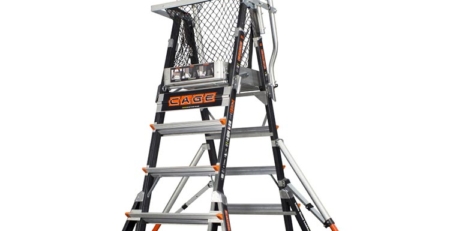 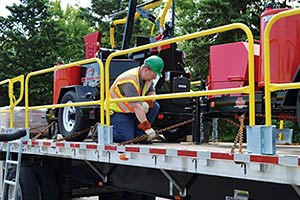 Flatbed trucks are highly versatile, and cost effective. They can accommodate several types of loads, including unusually shaped, and... read more 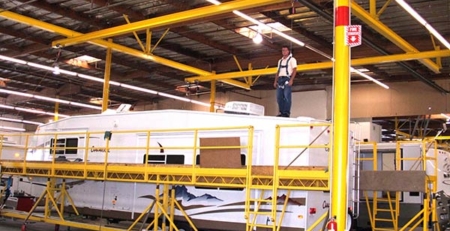 Workers in the aviation, oil and gas, transportation, utility and mining industries may not have much in common with... read more 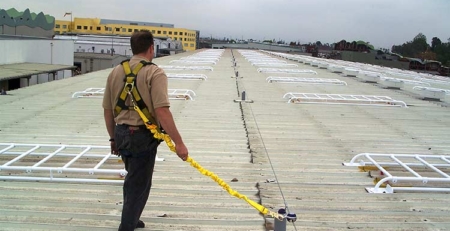 Roof Fall Prevention & Safety Whether it's for maintenance purposes or it's a regular part of the job, some workers... read more 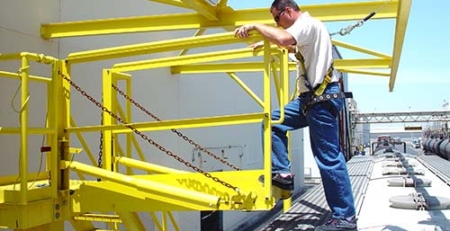 A Gangway makes it Safe for Servicing Trucks and Railcars 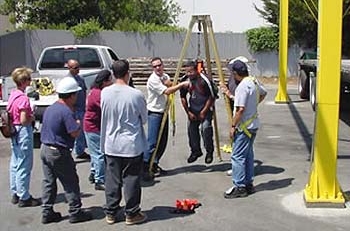 Fall Protection Training: Your Life Is On The Line

When you think of common workplace accidents, falls are probably not at the top of the list. However, they... read more

Adding mezzanines can be a relatively inexpensive way to nearly double your warehousing area. However, they bring with them... read more 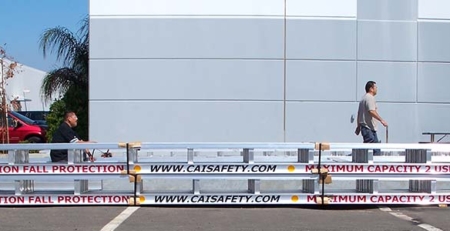 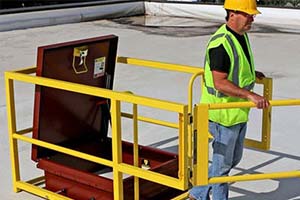 Falls are one of the most preventable workplace injuries. Yet, each year hundreds of people are injured, sometimes killed... read more

To get additional information and request quotes, contact CAI Safety Systems, Inc. at